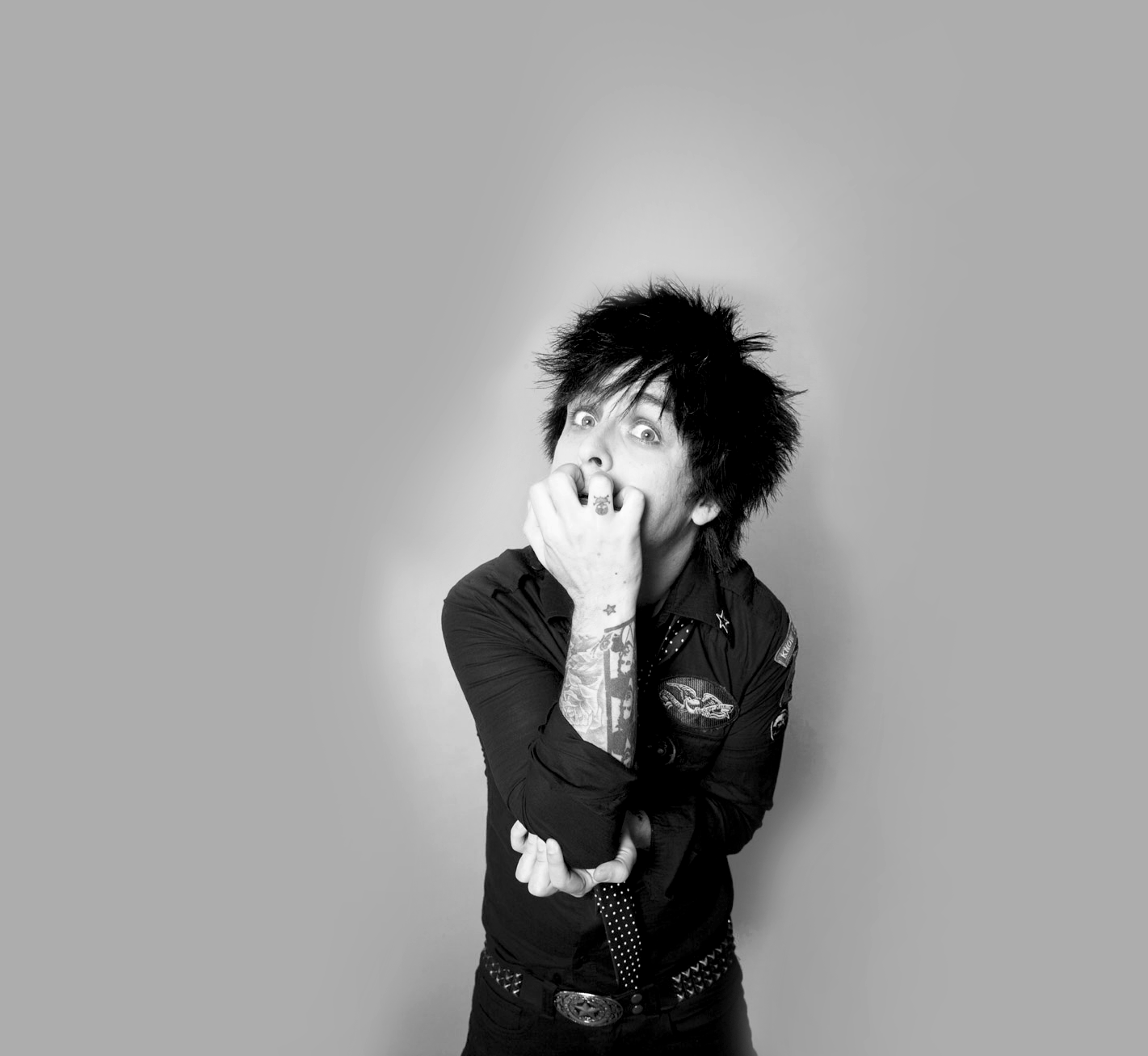 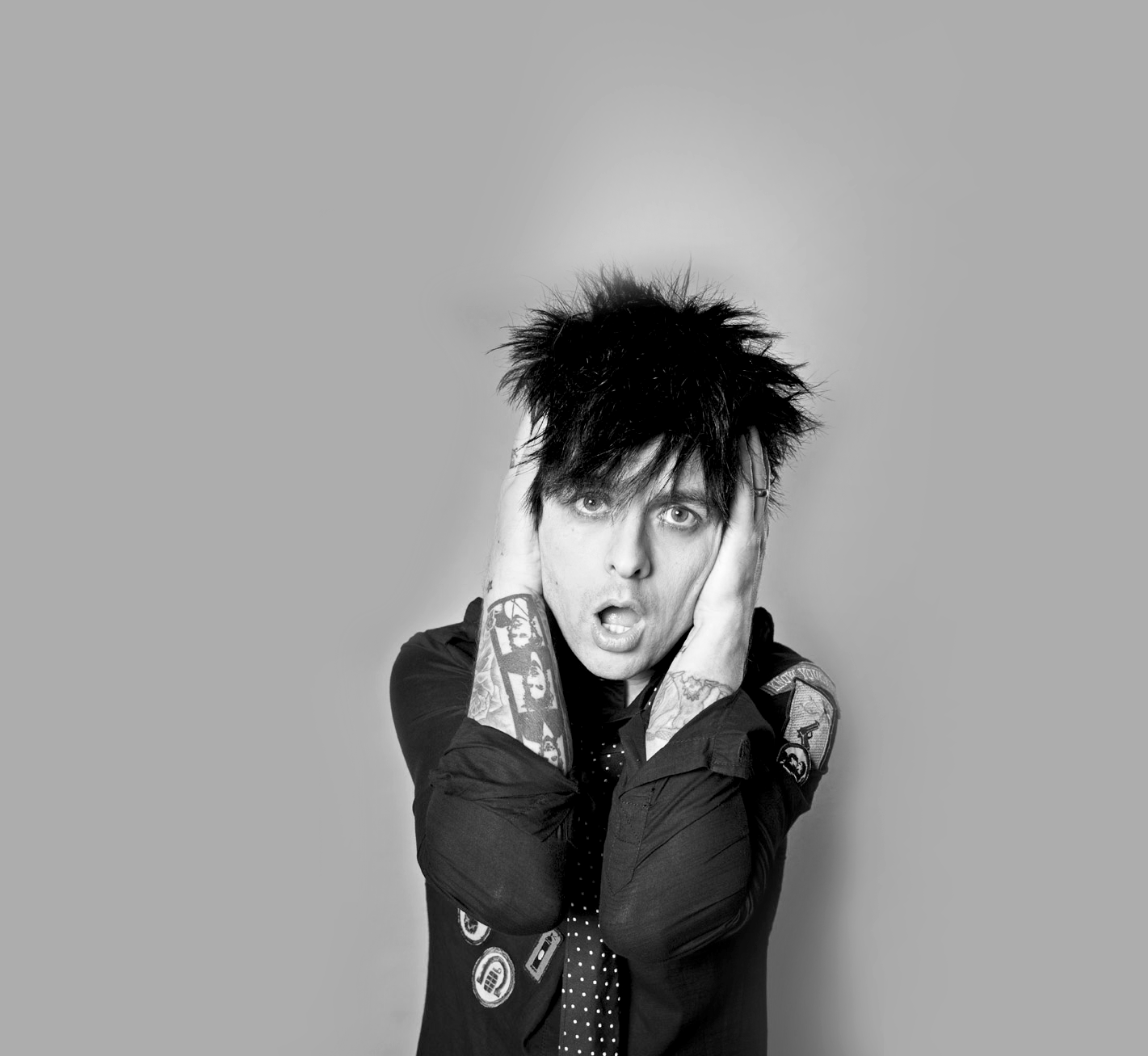 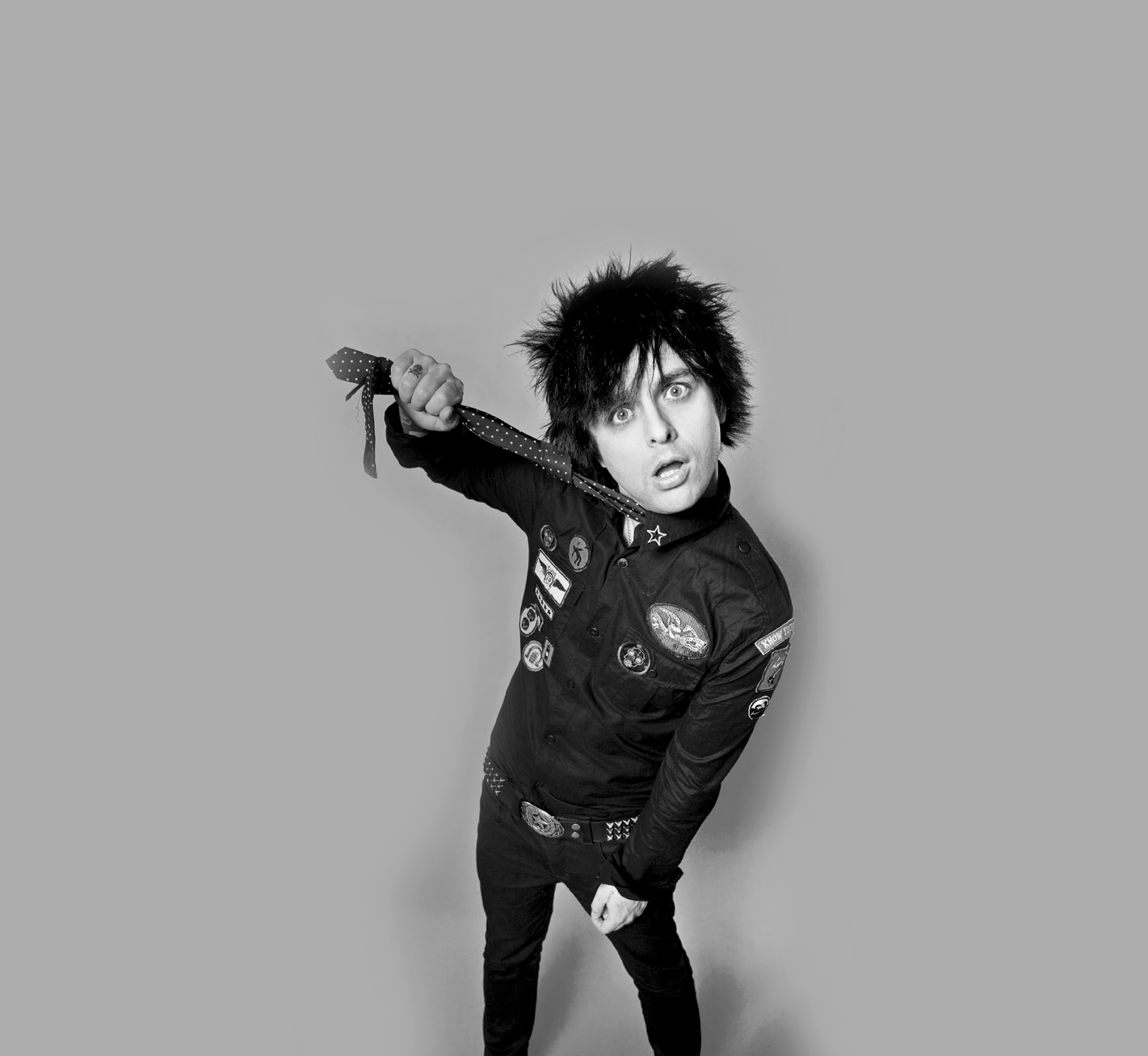 Billie Joe Armstrong is an American singer, songwriter, musician, record producer, and actor. He provides lead vocals and guitar of the punk rock band Green Day, co-founded with Mike Dirnt. He is also a guitarist and vocalist for Pinhead Gunpowder, and provides vocals for Green Day's side projects Foxboro Hot Tubs, The Network and The Longshot. 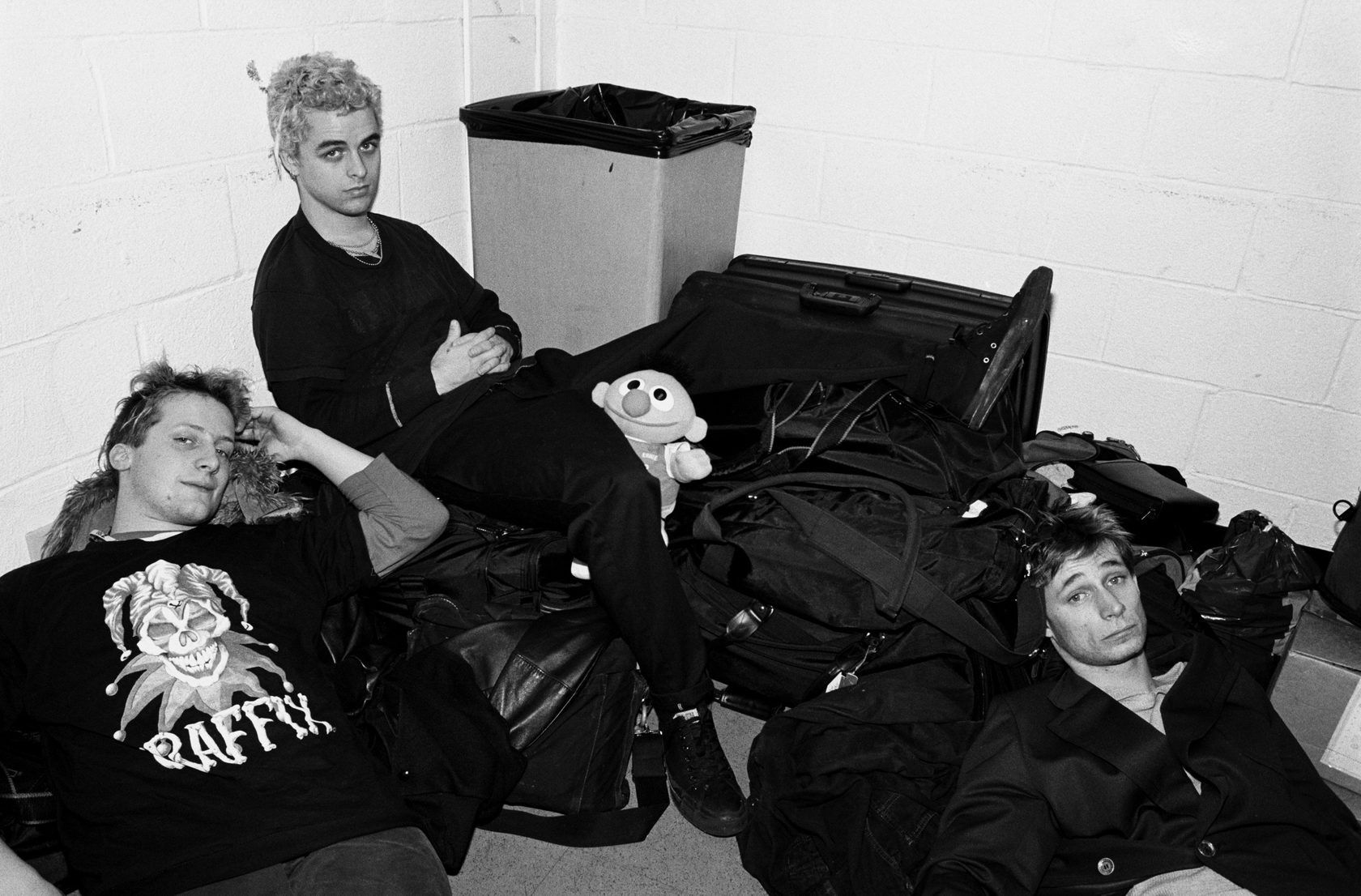 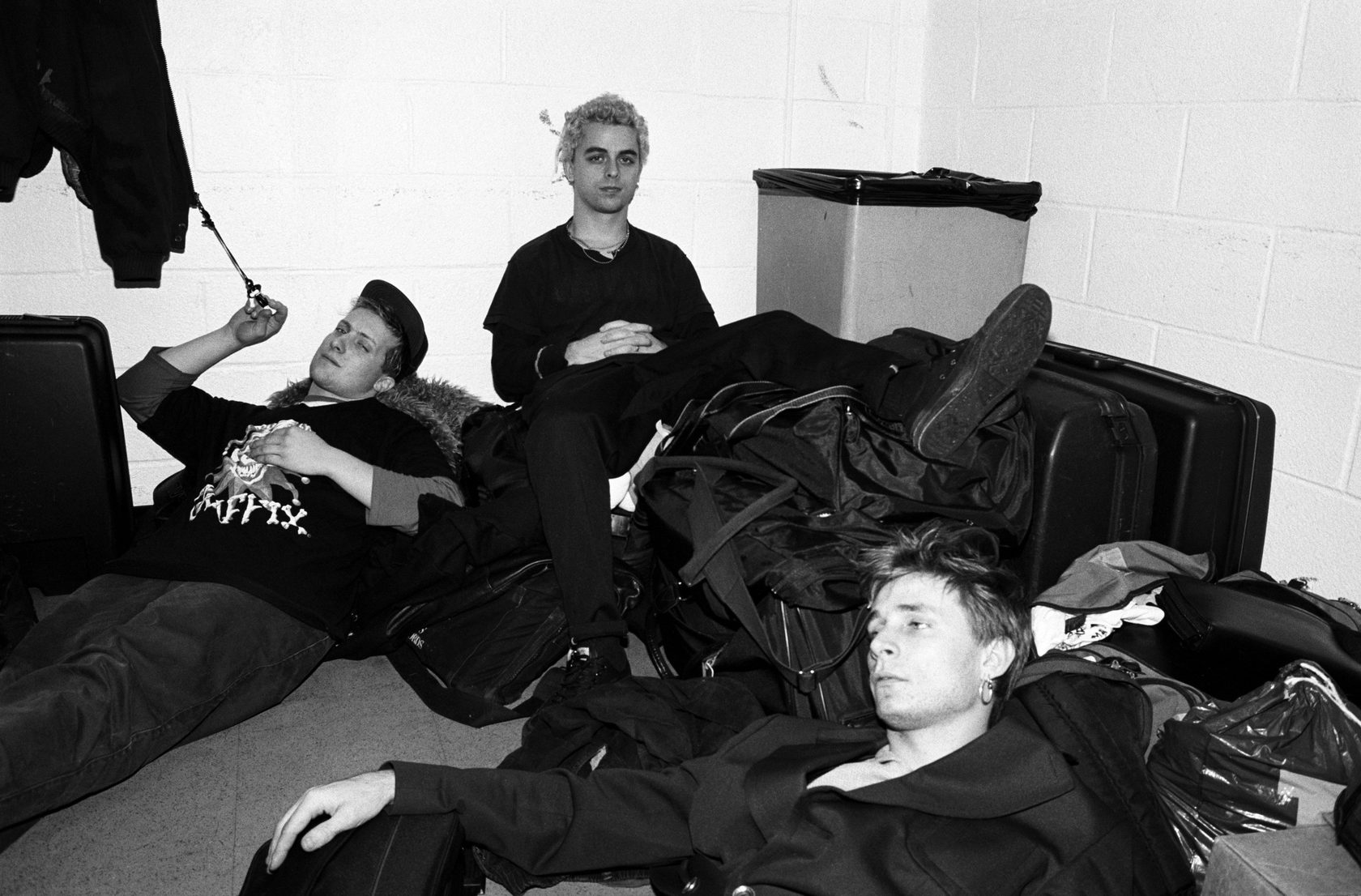 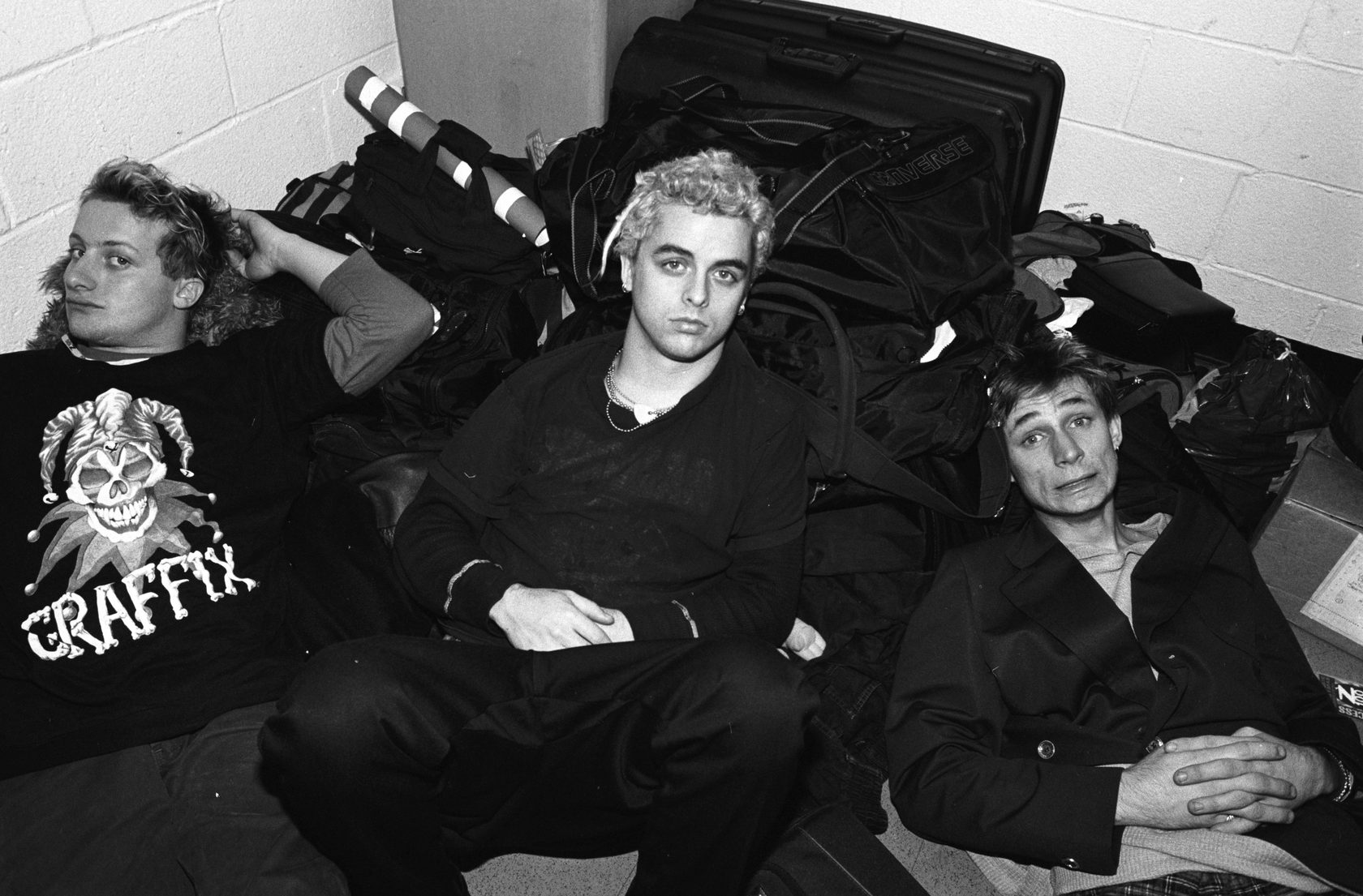 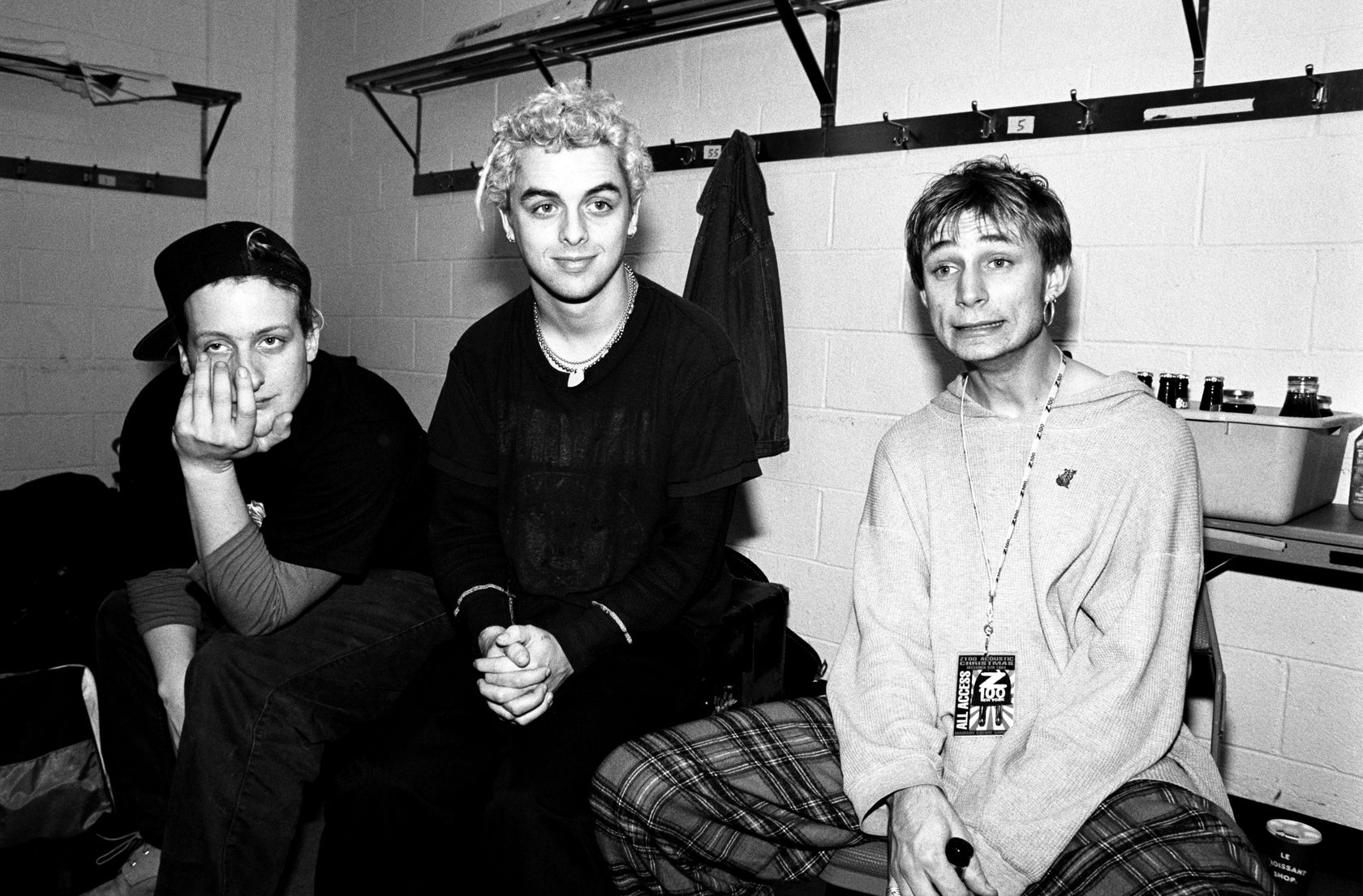 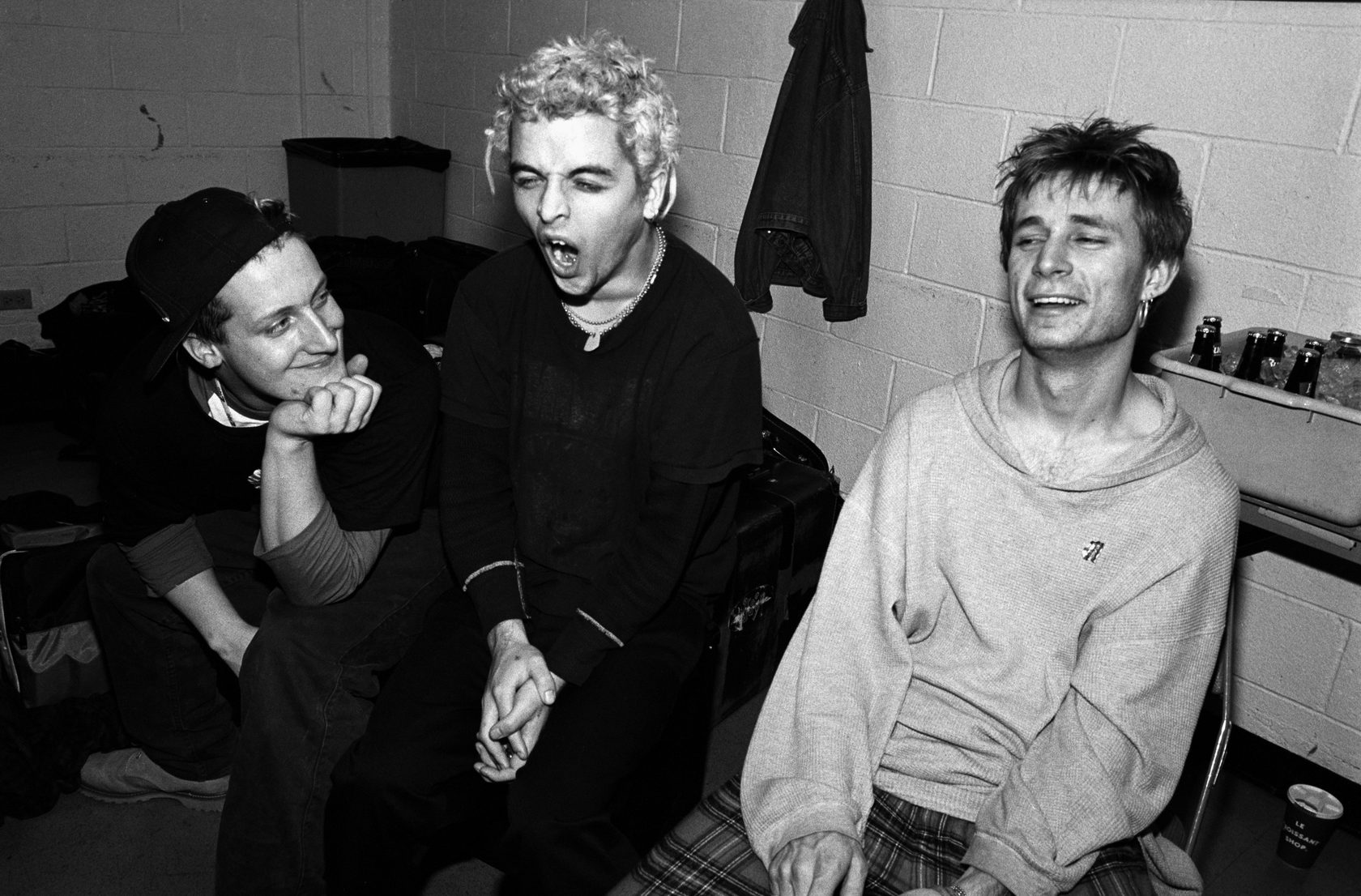 In 1986 Armstrong formed Sweet Children band with his friend Mike Dirnt. Armstrong and Dirnt played guitar, with Raj Punjabi on drums and Sean Hughes on bass. Punjabi was later replaced by John Kiffmeyer, also known as Al Sobrante. After a few performances Hughes left, Dirnt began playing bass, making Sweet Children a three-piece band. They changed their name to Green Day in April 1989, choosing the name because of their fondness for marijuana.
Armstrong's interest in music started at
a young age.
Born in Oakland, California, and raised in nearby Rodeo, the youngest of six children of Ollie Jackson and Andrew M. Armstrong, he wrote and recorded his first song at the age of five. He attended Hillcrest Elementary School in Rodeo, where a teacher encouraged him to record a song titled "Look for Love" on the Bay Area label Fiat Records.

At the age of 10, Armstrong met Mike Dirnt in the school cafeteria, and they immediately bonded over their love of music. He became interested in punk rock after being introduced to the genre by his brothers. Armstrong has also cited Minneapolis-based bands The Replacements and Hüsker Dü as major musical influences. Five years later, Armstrong and Dirnt formed the band Sweet Children, which name changed to Green Day, and would later achieve commercial success. Armstrong has also pursued musical projects outside of Green Day's work, including numerous collaborations with other musicians.

His father, a jazz musician and truck driver for Safeway, died of esophageal cancer in September 1982, when Armstrong was 10. The song "Wake Me Up When September Ends" is a memorial to his father. He has five older siblings: David, Alan, Marci, Hollie, and Anna. His mother worked as waitress at Rod's Hickory Pit restaurant in El Cerrito, where Armstrong and Dirnt played their first gig in 1987. Armstrong's great-great-grandparents Pietro Marsicano and Teresa Nigro were Italianimmigrants from Viggiano, Basilicata who moved to Boston before arriving in Berkeley in 1869. For this, he received the honorary citizenship of Viggiano in June 2018.

Along with Hillcrest Elementary, Armstrong attended Carquinez Middle School and John Swett High School, both in Crockett, and later transferred to Pinole Valley High School in Pinole. On his 18th birthday he dropped out to pursue his musical career.

Armstrong met his first serious girlfriend, Erica Paleno, inside the Gilman music club on his sixteenth birthday. Erica became known as the "first official Green Day fan" as she listened to the first four-track recordings by Armstrong and Sean Hughes, encouraging the band, touring with them and acting as occasional photographer for the band. Erica inspired many of Green Day's well known songs including "Christie Road", which was written about the local railroad tracks where she and Armstrong would sneak out to meet. When Armstrong began living in punk houses and warehouses at the age of seventeen, including the warehouse above a West Oakland brothel which ultimately inspired the song "Welcome to Paradise" Erica would often stay with him despite the dangers, "I would stay with him sometimes in these warehouses full of crusty punks". The couple split in late 1991. Erica is the sister of former Green Day touring member Mike Pelino, and the sister-in-law of Janna White, wife of Pinhead Gunpowder vocalist/guitarist and Green Day touring guitarist Jason White. 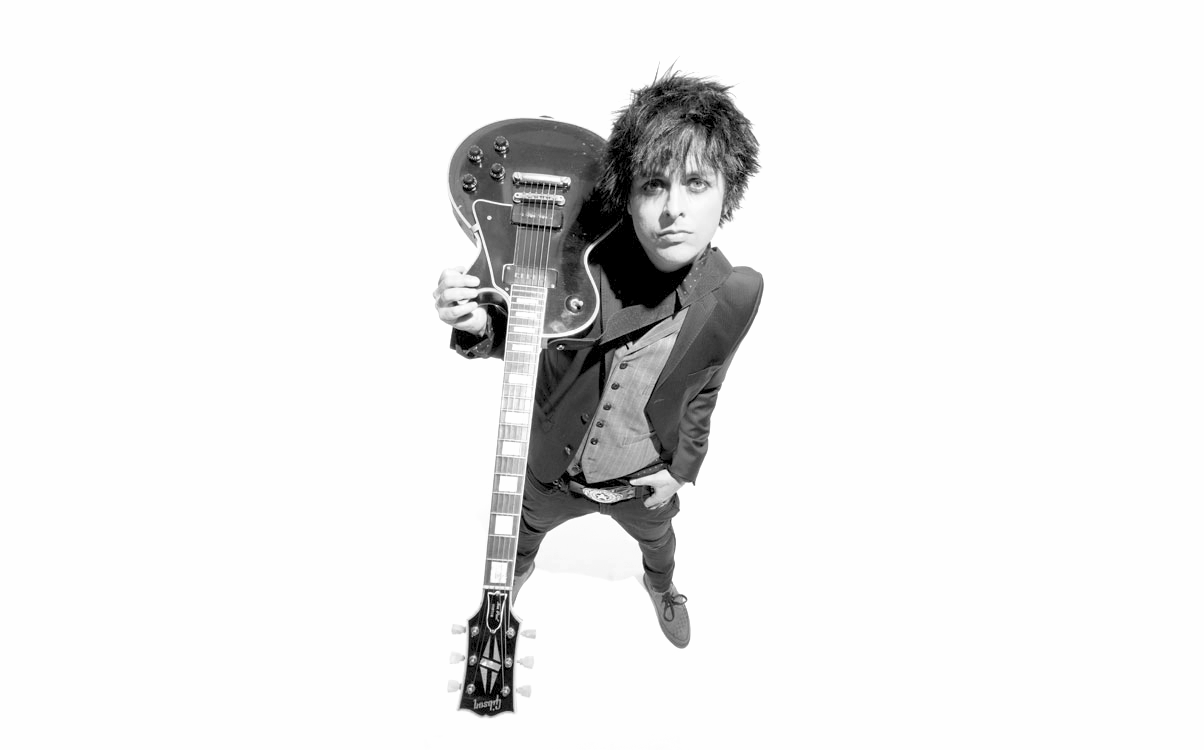 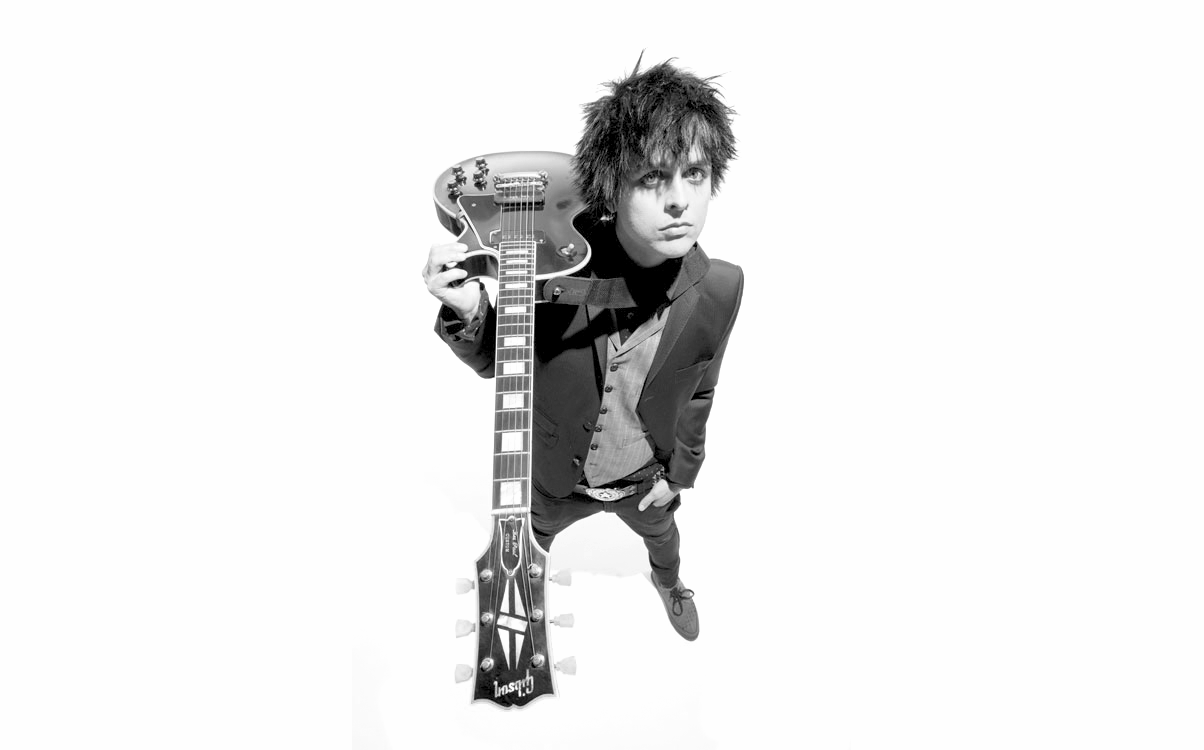 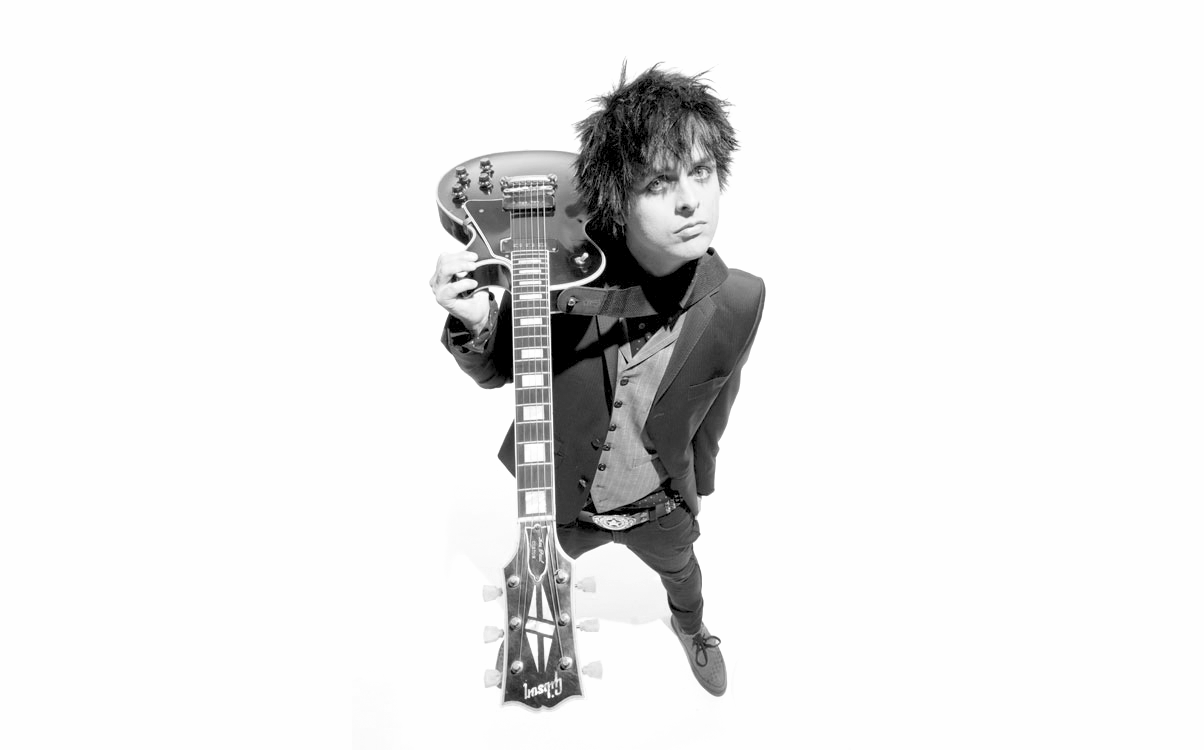 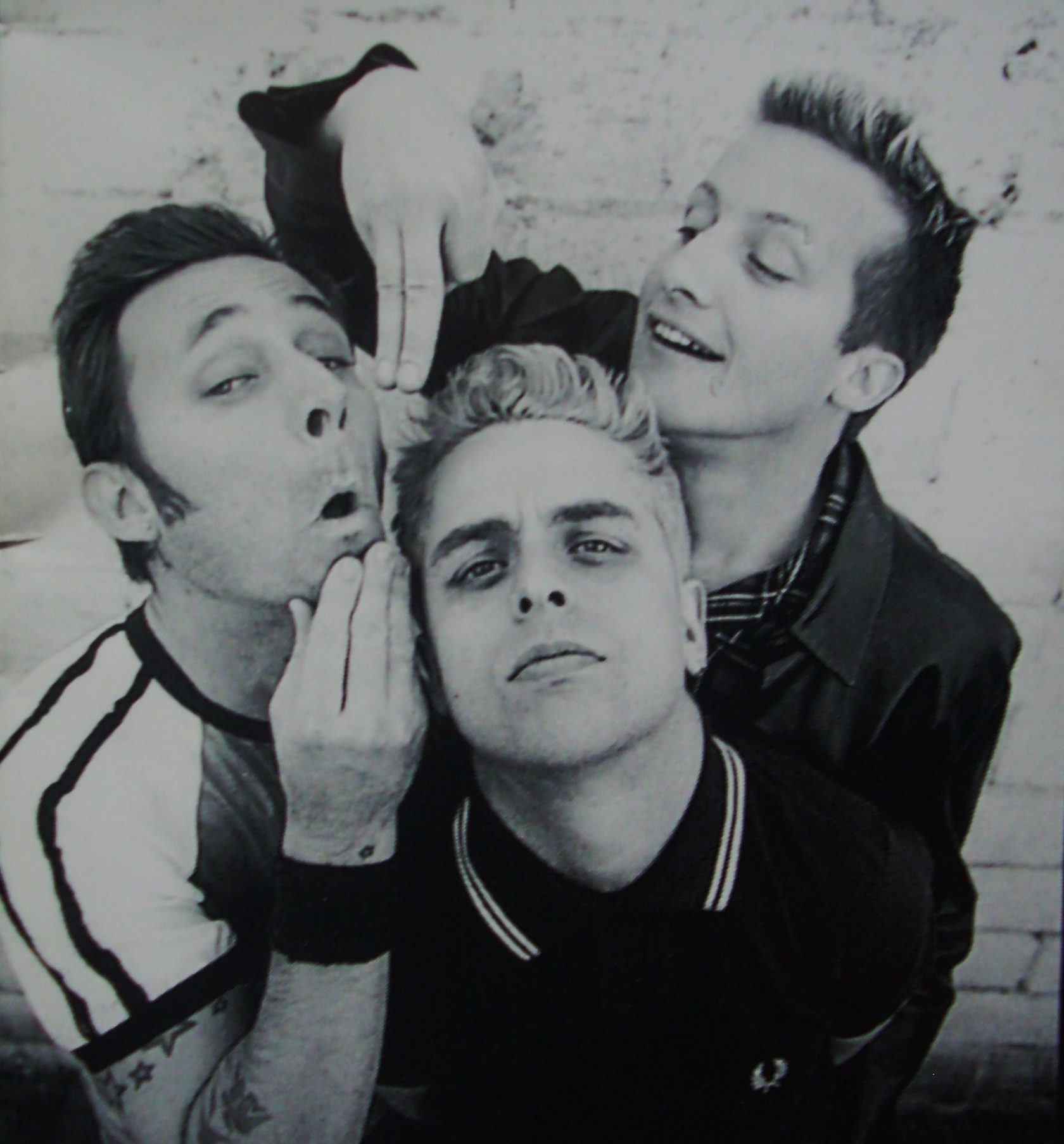 In 1986, aged 14, Armstrong formed a band called Sweet Children with his childhood friend Mike Dirnt. In the beginning, Armstrong and Dirnt both played guitar, with Raj Punjabi[9] on drums and Sean Hughes on bass. Punjabi was later replaced on drums by John Kiffmeyer, also known as Al Sobrante. After a few performances, Hughes left the band in 1988; Dirnt then began playing bass and they became a three-piece band. They changed their name to Green Day in April 1989, choosing the name because of their fondness for marijuana.

In 1989, Armstrong provided lead guitar and backing vocals on three songs for The Lookouts' final EP IV. That same year, Green Day released their debut EP 1,000 Hours through Lookout! Records. They recorded their debut studio album 39/Smooth and the extended play Slappy in 1990, which were later combined with 1,000 Hours into the compilation 1,039/Smoothed Out Slappy Hours in 1991.

Tré Cool became Green Day's drummer in late 1990 after Sobrante left in order to go to college. Cool made his debut on Green Day's second album, Kerplunk, released in 1991.

This year Armstrong joined the band Pinhead Gunpowder, consisting of bassist Bill Schneider, drummer Aaron Cometbus, and fellow vocalist/guitarist Sarah Kirsch. Kirsch left the group in 1992, and was replaced by Jason White. The group has released several extended plays and albums from 1991 to the present, and performs live shows on an intermittent basis.

Armstrong collaborated with many artists. He co-wrote The Go-Go's 2001 song "Unforgiven". He has also co-written songs with Penelope Houston ("The Angel and The Jerk" and "New Day"), and sung backing vocals with Melissa Auf der Maur on Ryan Adams' "Do Miss America" (where they acted as the backing band for Iggy Popon his Skull Ring album ("Private Hell" and "Supermarket")). Armstrong produced an album for The Riverdales. He was part of the Green Day side project The Networkfrom 2003 to 2005. The Network released one album, 2003's Money Money 2020.

Hoping to clear his head and develop new ideas for songs, Armstrong traveled to New York City alone for a few weeks in 2003, renting a small apartment in the East Village of Manhattan. He spent much of this time taking long walks and participating in jam sessions in the basement of Hi-Fi, a bar in Manhattan. However, the friends he made during this time drank too much for his liking, which was the catalyst for Armstrong's return to the Bay Area. After returning home, Armstrong was arrested on DUI charges on January 5, 2003, and released on $1,200 bail.

Armstrong performing in 2006 In 2004, Green Day debuted American Idiot, their first rock opera. The album has sold more than 15,000,000 copies worldwide, fueled by the hit singles "American Idiot", "Boulevard of Broken Dreams" and "Wake Me Up When September Ends". In 2009, Green Day released 21st Century Breakdown, the band's second rock opera, which was another commercial success. Between these two projects, Armstrong was the lead vocalist of the Green Day side project Foxboro Hot Tubs, who formed in 2007 and have performed intermittent live shows ever since. Foxboro Hot Tubs released one album, Stop Drop and Roll!!!, in 2008.

In 2009, American Idiot was turned adapted into a Broadway musical, also called American Idiot. The musical won two Tony Awards. Armstrong appeared in American Idiot in the role of St. Jimmy for two stints in late 2010 and early 2011.

In 2012, Green Day released a trio of albums: ¡Uno!, ¡Dos!, and ¡Tré!. In 2013, Armstrong appeared on Season 3 of NBC's The Voice as an assistant mentor for Christina Aguilera's team. That same year, Armstrong and singer-songwriter Norah Jonesreleased the album Foreverly, consisting of covers of songs from The Everly Brothers' album Songs Our Daddy Taught Us. The first single from the album, "Long Time Gone", was released on October 23.

Armstrong also collaborated with the comedy hip hop group Lonely Island in their song "I Run NY" from The Wack Album released on June 7, 2013. He starred alongside Leighton Meester in the 2014 film Like Sunday, Like Rain. For his work in the film, Bilie Joe won the Breakout Performance Award at the 2014 Williamsburg Independent Film Festival. Armstrong wrote songs for These Paper Bullets, a rock musical adaptation of Much Ado About Nothing, which premiered at Yale Repertory Theater in March 2014.

In 2014 Armstrong joined The Replacements for a number of shows beginning on April 19 at Coachella. Frontman Paul Westerberg had been suffering with back problems and spent the majority of the gig lying on a sofa while Armstrong helped play his parts. Westerberg referred to Billie Joe as an "expansion of the band". Armstrong joined The Replacements on stage again at the Shaky Knees music festival in Atlanta in May.

In November 2014, Armstrong moved with his son Joseph to New York and began working on another acting role, in the film Ordinary World. It was Armstrong's first lead acting role. The film centers on the mid-life crisis of a husband and father who attempts to revisit his punk past, and was released in 2016. It included new songs written and performed by Armstrong. The film got mixed reviews, although Armstrong's own performance was generally praised, with The Village Voice writing that he had "a low-key charm suggesting that, if he desired it, he could get more onscreen gigs in between albums."

In November 2016, Green Day released their latest album, Revolution Radio. In July 2017, it was announced Armstrong formed a supergroup with Tim Armstrong of Rancid, aptly named The Armstrongs.

In April 20, 2018, Armstrong released a solo album, Love Is For Losers, under the pseudonym The Longshot. Shortly after, a summer tour was announced under The Longshot name. During live performances, Armstrong is joined by Kevin Preston and David S. Field of the band Prima Donna on lead guitar and drums, respectively, and longtime Green Day live member Jeff Matika on bass. 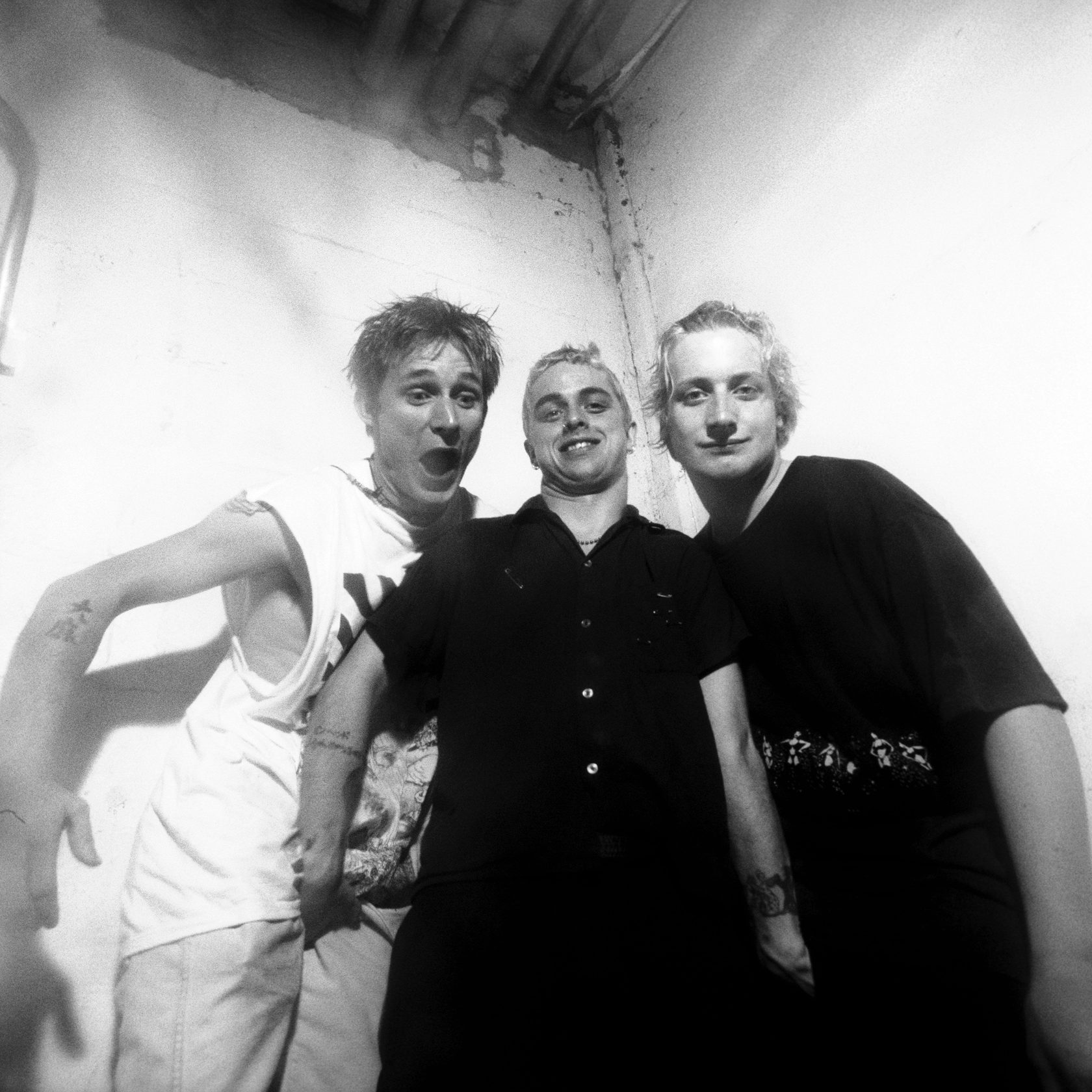 This site was made on Tilda — a website builder that helps to create a website without any code
Create a website
How to remove this block?About platformSubmit a complaint